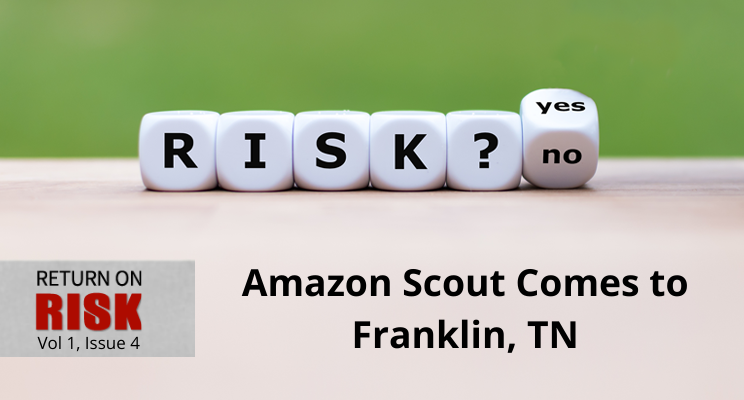 “From very early on in Amazon’s life, we knew we wanted to create a culture of builders — people who are curious, explorers. They like to invent. Even when they’re experts, they are ‘fresh’ with a beginner’s mind. They see the way we do things as just the way we do things now. A builder’s mentality helps us approach big, hard-to-solve opportunities with a humble conviction that success can come through iteration: invent, launch, reinvent, relaunch, start over, rinse, repeat, again and again. They know the path to success is anything but straight.”  (Jeff Bezos’ 2018 Letter to Shareowners)

The Amazon Scout program was announced in January 2019 in a blog post written by Sean Scott, Vice President of Amazon Autonomous Delivery — Scout.

In that article, Scott says, “We’ve been hard at work developing a new, fully-electric delivery system — Amazon Scout — designed to safely get packages to customers using autonomous delivery devices. These devices were created by Amazon, are the size of a small cooler, and roll along sidewalks at a walking pace. Starting today, these devices will begin delivering packages to customers in a neighborhood in Snohomish County, Washington.”

In August 2019, the Scout team expanded to Irvine, California.

Fast forward to this week, and Scott announced that Amazon Scout heads south to Atlanta, Georgia and Franklin, Tennessee. 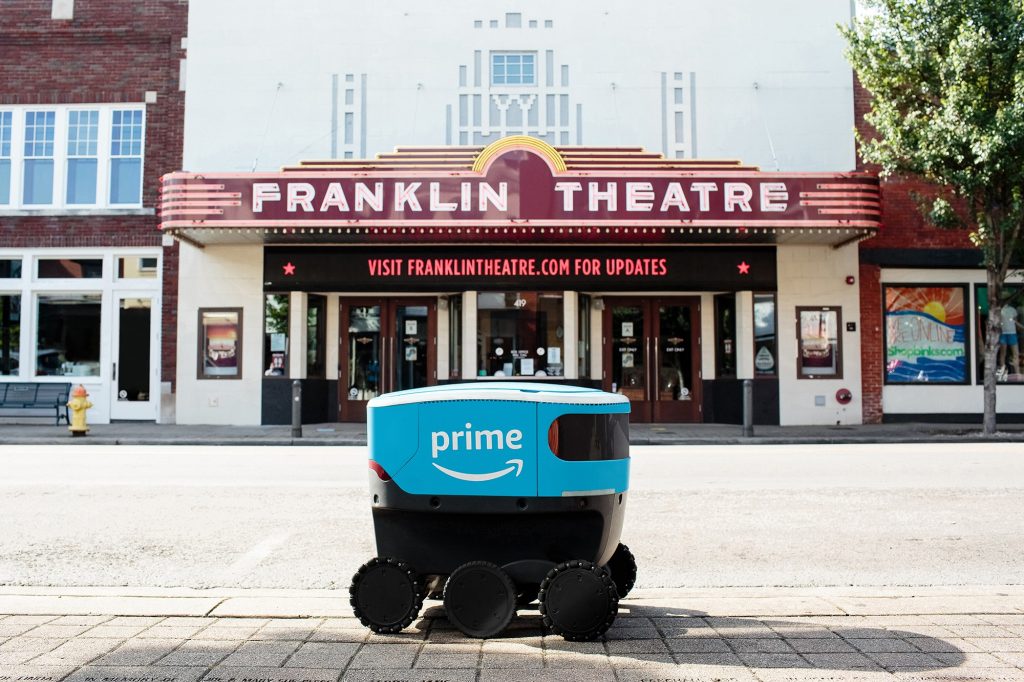 This picture included in the announcement is of an Amazon Scout delivery device in front of the Franklin Theater located in historic downtown Franklin, Tennessee. This is especially personal for me as I live a short three-block walk from the Franklin Theater. I can’t wait to see a Scout rolling down the sidewalk past my house.

It’s not a surprise that Amazon would choose Franklin, Tennessee.

When Amazon announced it was going to create a second headquarters in Crystal City, Virginia (just across the river from Washington, DC), they also announced it was creating a new Center of Excellence for its Operations business in Nashville. Amazon Operations is responsible for the company’s customer fulfillment, transportation, supply chain, and other similar activities. The Operations Center of Excellence in Nashville will create more than 5,000 jobs.

The Amazon Scout program is one example of many projects at Amazon that illustrate the practical application of the Anderson Growth Principles identified in my book The Bezos Letters. 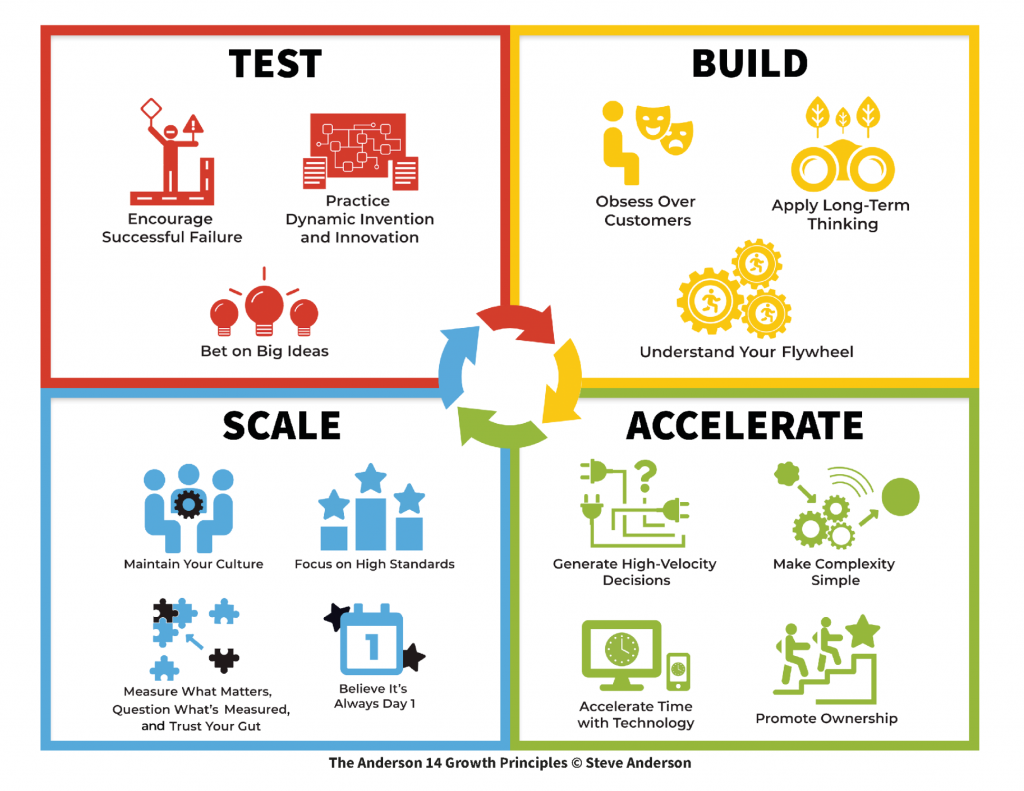 Below I have highlighted a few of the growth principles and how Amazon Scout has used them to “invent on behalf of the customer.”

Principle #3 — Practice Dynamic Invention and Innovation: at first glance, the Amazon Scout program is a bit crazy. The idea of a six-wheel small cooler rolling down the sidewalk of your neighborhood delivering packages door-to-door isn’t how things are done today. At Amazon, however, experimenting with crazy ideas is built into the culture, because sometimes crazy ideas do work.

Principle #4 — Obsess Over Customers: One of the customer pillars at Amazon is fast delivery. The Amazon Scout team is focused on experimenting with new ways to deliver packages to customers. This is the core of their customer obsession.

Principle #5 — Apply Long-Term Thinking: Amazon has no problem investing in crazy ideas for the long-term. Scott’s LinkedIn profile says he’s been in the VP of Scout position since 2017. In 2019, the team announced the first live experiment in Snohomish County, Washington, after at least two years of development. Amazon takes a long-term view and is willing to invest the time and resources to let crazy ideas develop.

“At Amazon’s current scale, planting seeds that will grow into meaningful new businesses takes some discipline, a bit of patience, and a nurturing culture.”  (Jeff Bezos’ 2006 Shareholder Letter)

Adding two new cities in the South is simply another step in expanding the experiment. One thing we can assume is that their experience so far gives them enough confidence to continue the experiment and expand the Amazon Scout program to these two new cities.

Principle #8 — Make Complexity Simple: Creating an autonomous vehicle that can navigate neighborhood sidewalks without running over pets or people is no simple task. One thing Amazon is especially good at is making something that is complex, simple, especially from the customer’s point of view.

Principle #9 — Accelerate Time with Technology: Amazon Scout leverages computer vision and machine learning (AWS Skills) to be able to accomplish the task of safely navigating around trash cans, skateboards, lawn chairs, the occasional snow blower, and the many other obstacles found in residential neighborhoods while rolling along sidewalks at a walking pace.

Principle #14 — It’s Always Day 1: The Amazon Scout Program is an example of the Day 1 mindset. The building where Jeff Bezos has his office has a plaque in the lobby that illustrates this mindset. It says, “There’s so much stuff that has yet to be invented. There’s so much new that’s going to happen. People don’t have any idea yet how impactful the Internet is going to be and that this is still Day 1 in such a big way.”

“There’s so much stuff that has yet to be invented. There’s so much new that’s going to happen. People don’t have any idea yet how impactful the Internet is going to be and that this is still Day 1 in such a big way.”

The growth principles I identified from Jeff Bezos’ Letter to Shareowners are not just slogans. They are used every day at Amazon. I am convinced that any business can learn these principles and apply them to their organization.