Why a Return on Risk Newsletter? 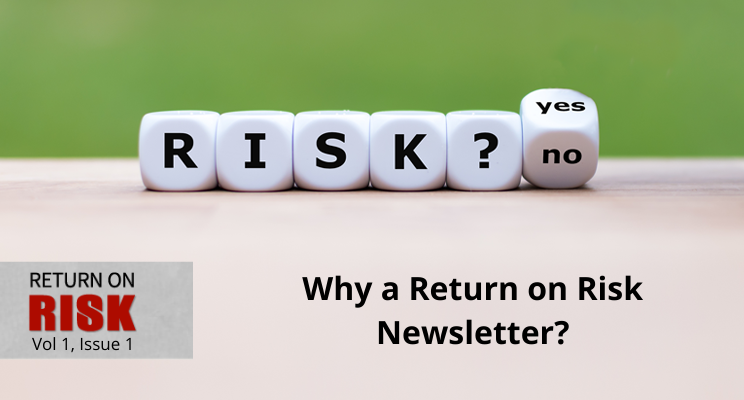 Having spent most of my career as a speaker and consultant on technology and risk, I know that many people think it’s always important to be protected from risk. Risk is viewed as inherently “bad,” and people do what they can to make sure they are covered if something unforeseen and devastating should happen, leaving them vulnerable and financially exposed.

Except, I don’t look at risk that way… and, I discovered, neither does Jeff Bezos.

What I’ve come to realize is there is an essential link between risk and business growth that many people overlook. From this point of view, risk can be framed in a very positive light. That’s why this newsletter will be looking at the growth of Amazon from a slightly different perspective—through the lens of risk.

Yes, every business takes risks but haphazard risk-taking is like rolling the dice. You never know what’s going to come up. But I have learned Bezos takes risks with intentionality, which most businesses, if aware, can also harness to achieve greater results.

I believe what has fueled Amazon’s growth comes down to Jeff Bezos’ unique approach to taking and leveraging risk and his commitment to creating a culture for experimentation and invention. And it’s all based on his views on success and, actually, failure.

In July 1994, thirty-year-old Jeff Bezos started a little online bookstore called Amazon.com, named after the longest river in South America. (Interestingly, Amazon.com was very nearly called “Cadabra,” as in “abracadabra.” Bezos decided to change the name when his lawyer misheard the word as “cadaver.”)

Amazon was instead named after the river reportedly for two reasons. One, to suggest scale (Amazon.com launched with the tagline “Earth’s Biggest Bookstore”) and two, back then websites were often listed in alphabetical order and Amazon would show up first.

What started as a simple idea would quickly grow into one of the most valuable companies in the world (based on market capitalization) along with Apple, Microsoft, Facebook, and Google. Amazon is the fastest company ever to reach $100 billion in sales. It was one of the first companies to be valued at $1 trillion. It employs over 798,000 people, a number greater than the population of many countries, including Luxembourg, Iceland, and the Bahamas. In his 2010 Baccalaureate remarks at Princeton University Bezos said,

I got the idea to start Amazon 16 years ago. I came across the fact that Web usage was growing at 2,300 percent per year. I’d never seen or heard of anything that grew that fast, and the idea of building an online bookstore with millions of titles—something that simply couldn’t exist in the physical world—was very exciting to me.

I had just turned 30 years old, and I’d been married for a year. I told my wife, MacKenzie, that I wanted to quit my job and go do this crazy thing that probably wouldn’t work since most startups don’t, and I wasn’t sure what would happen after that. MacKenzie (also a Princeton grad and sitting here in the second row) told me I should go for it.

As a young boy, I’d been a garage inventor. I’d invented an automatic gate closer out of cement-filled tires, a solar cooker that didn’t work very well out of an umbrella and tinfoil, baking-pan alarms to entrap my siblings. I’d always wanted to be an inventor, and she wanted me to follow my passion.”

During its first twenty years in business, Amazon survived the dot-com bubble of the early 2000s, the Financial Crisis and Great Recession from 2007–2009, and countless other financial crises that took out many of Amazon’s contemporaries.

By the time Amazon hit its $1 trillion valuation in 2018, Bezos had surpassed Bill Gates, Warren Buffett, and seven billion other people to become the wealthiest person in the world, with a net worth of $137 billion (give or take).

What propelled this unprecedented growth?

Fortunately, Bezos didn’t operate behind a curtain, hiding his mechanisms and strategies like the Wizard of Oz. That’s where the Shareholder Letters come in. They reveal his thinking and his strategy from the beginning of Amazon to the present.

Bezos was extremely savvy when it came to growing Amazon: he knew there was an exquisite tension between risk and growth. You don’t grow if you’re not willing to take risks.

But here’s where Bezos does what I consider to be incredibly astute: he chooses to play the game differently by always assessing his “return on risk.”

“Return on Risk,” or ROR, is a term I use to refer to the relationship between the cost of risk and its return (which isn’t always financial). It’s similar to how you would think of a “Return on Investment,” or ROI.

From the owner to the receptionist, everyone in business understands that everything we do has a cost and a benefit. Every dollar we spend to advertise, pay salaries, buy materials, deliver goods, build a website, and anything else we do should create more than a dollar in return. Every minute we spend working on something should similarly create an income worthy of the time spent.

Although most everyone in business views money spent on the business through an investment framework, virtually no one thinks about business risk as an investment—with the possible exception of Jeff Bezos.

When the internet was first launching into the mainstream, Bezos was quick to observe that a 2300 percent growth rate was exceptional. He quit his stable Wall Street job to launch an online business when most of the online businesses at the time were of “questionable repute.” He got a $300k loan from his parents and moved his family across country to start an unknown business.

Was that risky? I’d say so.

In 1997, most people didn’t have internet access at home and if they did it was “dial-up” (remember the movie You’ve Got Mail?). In fact, in his ‘97 Letter, Bezos referred to the internet as the “World Wide Wait.”

And Bezos quit his job to start an online bookstore.

Bezos certainly took a risk for his online business at a time that an online business was a crap shoot, at best. Just a short year after Amazon went public, Bezos wrote:

We predict the next 3½ years will be even more exciting. We are working to build a place where tens of millions of customers can come to find and discover anything they might want to buy online. It is truly Day 1 for the Internet and, if we execute our business plan well, it remains Day 1 for Amazon.com. Given what’s happened, it may be difficult to conceive, but we think the opportunities and risks ahead of us are even greater than those behind us. We will have to make many conscious and deliberate choices, some of which will be bold and unconventional. Hopefully, some will turn out to be winners. Certainly, some will turn out to be mistakes. —Bezos (1998 Letter)

In hindsight, Bezos did have a few “mistakes,” but he also had unprecedented growth.

Suffice it to say, even though he started with a main idea and business model, although it looked like he put “all his eggs in one basket,” his plan was diversification from the beginning. The difference is that he was always testing to see what the market wanted and inventing on behalf of the customer, even when they didn’t know what they wanted. His risks were intentional and calculated, but still risks, nonetheless.

He started by taking a risk with an idea for a dot-com business and, with the money he would scrape together and with a loan from his parents, he leveraged that idea into Amazon, a company that has worldwide recognition and made him the wealthiest man in the world.

And that’s why Bezos is such a Master of Risk.